F-35s out of Hill AFB may combat ISIS 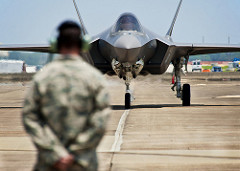 General Herbert “Hawk” Carlisle told reporters F-35’s from Hill Air Force Base could be deployed to Syria and Iraq in the near future, when the fighter jet is declared ready for combat.

“The minute I declare initial operational capability, if the combatant commander called me up and said, ‘We need F-35s,’ I would send them,” Carlisle says in an article published by Air Force Times.